Posted on January 15, 2020 by Knichel Logistics

With 2020 finally underway, five new regulations have been implemented that have the potential to impact truck capacity. Independently, one of these regulations might not result in much of a shake up, but all together we are likely to see some changes in the trucking market this year with regards to truck availability, and consequently rates.

Regulation #1: The AOBRD to ELD switch

We’re already one month into this switch taking place with not too much of an impact being felt. This is likely due to the fact that most trucks had been equipped with ELD’s during the Electronic Logging Device mandate of 2017. Larger carriers had still been using Automatic Onboard Recording Devices (AOBRDs) to log drivers’ hours of service after the 2017 mandate, but they also had two years in which to prepare for the switch. If you recall, the 2017 mandate contributed to an increase in truck rates, which remained higher than average throughout 2018. The AOBRD switch is expected to be less disruptive than the ELD mandate, so that’s good news.

As of January 1st, a new law has been implemented in California that essentially changes the classification of independent contractors. As it stands, there are over 70,000 independent contractor truck drivers in the state of California alone, which means that AB5 could have a tremendous impact on the transportation sector in particular. At this point however, a temporary injunction has halted the implementation of AB5 in the trucking sector and a second court case argues that AB5 conflicts with federal law within the transportation industry. Critics of AB5 argue that the “B” component of the ABC Test is the most damaging to motor carriers. The “B” component prohibits a company from hiring contract workers to perform a task that is at the core of what the company does. Therefore, trucking companies who hire independent contractors to drive for them would be in violation of that component and should treat the contractor as an employee. According to critics, this bill limits the freedoms of independent contractors while also creating additional costs for trucking companies. Keep your eyes open for more information on AB5 as it appears to be evolving daily. 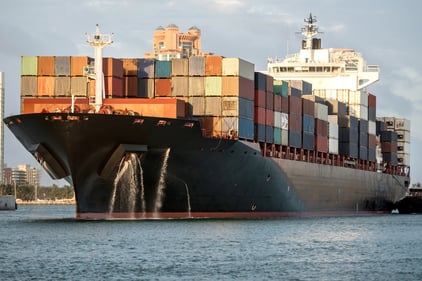 The International Maritime Organization (IMO) regulations limiting sulfur content of bunker fuel to 0.5% (down from 3.5%) went into effect on January 1st. This regulation applies to all ocean vessels and requires them to switch to cleaner, ultra-low sulfur fuels. A very small percentage of ocean vessels have been burning compliant fuel, but those who have not have some options at this stage – convert to low-sulfur or a blend of heavy fuel oil (HFO) and low-sulfur that meets emissions standards, install very pricey fuel scrubbers and continue to burn heavy fuel oil, ditch their heavy fuel oil burning ships for LNG (liquid natural gas) vessels, obtain waivers, or just deal with non-compliance. Low sulfur fuels are created using a distillate that is also used for diesel fuel. With that said, expect diesel prices to go up as distillates dedicated for diesel are diverted to marine fuel production.

Effective January 1st, the U.S. Department of Labor announced a final rule that will make 1.3 million American workers newly eligible for overtime pay under the Fair Labor Standards Act. It’s tough to gauge how this will impact our industry, but like most things, there’s a likelihood that it will increase costs down the line. Keep in mind that this new regulation probably won’t impact most drivers, as they are typically paid by the mile, but it could likely impact brokerage companies and carrier office staff. In addition to the salary threshold increasing for employees to be considered exempt from overtime, it is worthwhile to note that being a salaried employee does not mean that they are exempt from overtime pay - this is a common misconception.

And finally, the latest regulation to be implemented is the FMCSA’s Drug & Alcohol Clearinghouse. This online database is currently up and running, and its purpose is to provide potential employers access to any CDL driver’s past drug and alcohol violations and also any test refusals made by them. Prior to the database, a driver who was fired from a position for drug or alcohol use could fairly easily obtain a new job with a different carrier in another state, as there was no way to find out this information. The purpose of this database is to essentially weed out past offenders from continuing to drive. The FMCSA has also raised the minimum percentage rate for random drug testing to 50% annually from 25% as of January 1st. The minimum rate for random alcohol testing will remain at 10% for the time being. With that said, we expect to see the number of qualified truck drivers falling, which would obviously have an impact on capacity.