Fixing National Infrastructure: A Problem Impacting Shipping and Beyond

Posted on February 08, 2017 by Knichel Logistics 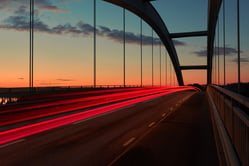 You’ve probably gotten this call more often than you’d like. Your shipment is delayed because the carrier got a flat tire or they were held up in gridlock for an hour on what should have been a 20-minute drive from the terminal. Situations like this are all too familiar for freight shippers because the network we rely on has been deteriorating for decades.

We all know that the U.S. transportation network is in grave disrepair. The American Society of Civil Engineers have given it a D rating, which, if we’re trying to view this from an optimistic perspective, is at least not totally failing. In Pennsylvania alone, 1 in 5 bridges are structurally deficient. That’s not entirely comforting considering the only way to get around the city of Pittsburgh is by going over at least one bridge. The Highway Trust fund is annually running at a deficit with no official plan in place to give it an allocated revenue stream beyond the meager federal fuel tax in place, which by the way, hasn’t been adjusted for inflation since 1993. That was 24 (!!!) years ago. A lot of ideas are being tossed into the ring right now, but what will pass and will it be a sustainable, long term solution?

The most obvious one that a lot of politicians are advocating is simply increasing the tax on diesel and gasoline. In theory, it seems like an easy solution, however there are some issues with this. First off, Americans like having nice things but don’t like to be taxed so that’s going to be a tough sale. We’ve been driving far more fuel-efficient vehicles which means there is less fuel to tax. Finally, it just won’t be enough. The federal government currently spends around $50 billion on infrastructure projects but the gas tax only brings in around $34 billion. That’s a pretty big gap to close with taxation alone.

Another idea that is being floated is a bit controversial to some. A few states have started testing a mileage-based fee system as an alternative to raising the fuel tax. Essentially it works by charging drivers for miles driven, or a “vehicle miles traveled” tax (VMT). The opposition to this is centered on a fear of drivers being monitored by the government and concerns over how to capture this data accurately without forcing drivers to install new technology, which is obviously another cost that we will have to bear.

An avenue that has been pursued to circumvent inaction by the federal government with some success has been funding projects via private investors. Public-private partnerships (P3s) have become increasingly popular in other parts of the world, but less so in the United States. One reason being that governmental bodies tend to be slow and sometimes resistant to doing business differently and another reason is that there are federal regulations that make private funding difficult. Additionally, major infrastructure projects are really only attractive to private investors if they are guaranteed some source of revenue stream upon completion of the project, such as a toll. It makes sense that they would want some kind of return on their investment.

So, those are some possible solutions to the funding issue, but another good question to ask is "how is Highway Trust Fund money allocated?" One point of contention is that some funds are being directed towards beautification projects and administrative expenses which do not address surface transportation structural deficiencies and safety concerns. In 2014, the Government Accountability Office (GAO) recommended that the Federal Highway Administration (FHWA) improve transparency to provide Congress and the public with greater visibility into how Highway Trust Fund monies are being allocated at a project-level. In their report, you can see their request for making this information readily available.

Thus far, Congress has proven unreliable at advancing this agenda. Kicking the can down the road on something as important as modernizing and maintaining our infrastructure is compounding the problem exponentially. The costs we are all taking on due to poor infrastructure continue to grow. Drivers are having to purchase more tires and take on recurrent vehicle repairs because of potholes and degraded roads, bottlenecks due to lack of capacity on highways lead to increased fuel consumption from idling in traffic, there is decreased productivity by drivers stuck in traffic, and most importantly, there are massive safety concerns. Nearly ten years ago, the I-35W bridge collapsed into the Mississippi River in Minneapolis killing 13 people and injuring 145 because it was in such terrible condition. If finding a long-term solution for upgrading and maintaining our national infrastructure is not made top priority, another disaster is sadly unavoidable.