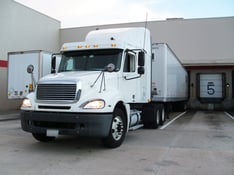 We’ve already shared our most recent intermodal success stories, so now it’s time to talk about our highway division’s high notes. Below are a few of our latest success stories, or logistics case studies, on the highway/brokerage/LTL side. These examples give a good sampling of the wide variety of commodities that Knichel Logistics can handle.

This is a brand-new customer that designs, fabricates and installs custom displays and signage out of the greater Philadelphia area. The owner sent our management team an email that discussed how happy the project engineer was with our highway dispatcher’s handling of the loading, tarping, and delivery of the signage after we completed our first highway load with them. It was a fairly delicate and complicated piece of freight to contend with and had a tight project completion deadline. They are a new company so volume is low right now, but they were very pleased with our performance (including the driver we hired to haul the load) and are using us again on their next project that should be coming up very soon. This is a classic case of how a first impression can build a good relationship, and hopefully as their company grows, we can grow with them.

In this case, the food distributor we are discussing had already been a long-term customer of Knichel Logistics, but was strictly an intermodal user for many years. They have fifteen branches spread across the US and Canada. A few years ago, the Knichel Logistics’ Over the Road division handled a large warehouse move for this distributor’s New York branch incredibly smoothly. This project consisted of completely relocating their entire inventory from one distribution center to a new one. Because of how seamlessly Knichel Logistics handled this particular warehouse move, we were hired recently for another distribution center relocation of their San Francisco branch in which we moved 99 loads in 4 weeks. We have not done much business with this particular branch in the past so it really spoke to our strengths to be selected for this project. Our good work on the New York warehouse move prompted them to reach out to us to handle this project as well, knowing that they did not have to worry about any issues once it was in our hands. We are confident that our performance during this project will lead to more business out of that branch. This was a nice example of showing our strengths across several modes.

This customer is a lower volume, non-profit grocery located in New England. The manager called Knichel Logistics’ Less Than Truckload division as he had 2 volume shipments he needed delivered to his location. Because he runs a nonprofit, he needed these shipments to deliver with cost-effective rates. He was referred by another customer, so he reached out to Knichel Logistics and another LTL asset-based provider for rates. We had received volume rates from this provider as well, but they gave him the same rates that they gave us, so he decided to go with them direct. This particular manager had never arranged for shipping before, so he was unsure of how to go about setting everything up. Even though we were not awarded his shipments, our LTL team helped him make the bill of ladings and set up the loads. Because of this assistance, Knichel Logistics is now the first provider he calls when he has any new loads. We are currently getting consistent shipments per week. We also have another customer that ships to him and he is SO happy that they use Knichel Logistics for their shipping as well!

Knichel Logistics’ less than truckload division is currently working on a freight management project for a supplement manufacturing company based out of Western Pennsylvania. It began when the account representative for this customer noticed that they were shipping inefficiently – only moving 1 or 2 pallets here and there each day and spending far too money much to do so. Knichel Logistics has taken on the task of compiling all of their shipment history in order to analyze the frequency and locations of past moves so that we are able to provide them with the information necessary to consolidate their shipments into truckloads rather than pallet moves. They have been able to save money via these consolidated shipments that move once or twice a week from specific locations versus the random pallet shipments they were previously moving every other day. Because of our visibility and freight consolidation assistance, we have saved them from wasting money while providing them with efficient and on-time shipping.