How are shipping conditions now that the ELD mandate has passed?

Posted on January 23, 2018 by Knichel Logistics

We are officially one month out since the ELD mandate deadline. You may be wondering what’s going on with ELD compliance, how has the mandate impacted shipping conditions, and how has capacity been affected by this new regulation (among other things). First, let’s keep in mind that actual enforcement of the ELD (electronic logging devices) mandate won’t really go into effect until April 1st of this year, but trucks should still all have the devices by now. Also bear in mind that this mandate should really only impact smaller carriers, as most of the larger ones have been compliant for some time. With that in mind, let's start with compliance.

CarrierLists has been running a weekly survey since last fall of ELD adoption rates among various sized fleets. As of this week, compliance rates are at 86% in their survey. According to their results, there are stark differences between fleet types. Longer haul carriers are now running close to 95% compliant, while shorter haul regional fleets are still only around 75% compliant. The reasoning behind the lag in compliance for shorter haul fleets is likely due to the fact that they run the same regional lanes daily and can more easily navigate the processes/inspections for these shorter distances. Long haul carriers, on the other hand, deal with more unfamiliar territory on the regular and are less likely to take their chances on not having ELDs. Enforcement is still in its infancy, meaning that drivers won’t be removed from service if non-compliant yet, but compliance officers are looking to see if drivers have ELDs via inspections. Non-compliance can lead to ticketing. On the enforcement side, there appears to have been some confusion between ELDs and AOBRDs (automatic onboard recording devices). The latter are a legal substitute for ELDs until 2019 that were grandfathered in, but in some cases they have been ticketed as non-compliant. Stay tuned until April to see how enforcement fully starts panning out.

In regards to current shipping conditions, it is still a carrier’s market. Whether or not the ELD has made an impact is yet to be determined, but it very likely hasn’t helped. 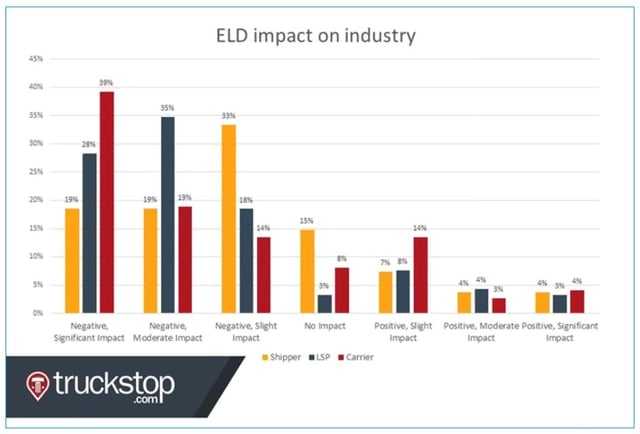 In the graph by Truckstop.com, it is obvious that carriers fear the impact of ELDs more than shippers do. FTR maintains a Shippers Condition Index (SCI) which showed a -9.6 at the end of October. Any number on their graph that is below 0 is considered to be an unfavorable market for shippers, and a -9.6 is very low by their standards.

Freight conditions in general have been strong for most of 2017, as the economy has been healthy. Coupled with tight capacity, which hasn’t quite recovered from when the hurricanes hit last fall, and we have ourselves a market of high spot rates and high demand for trucks. Some carriers are trying to alleviate the crunch by ordering more trailers. Another tactic that some carriers are employing is switching to drop and hooks. This process saves time by not having to wait for the trailer to be loaded and is therefore a more productive use of driver time.

So this is where we are right now – trucks are in demand, spot market rates are high, truck capacity is still low, new regulations (ELD) are complicating the situation, plus a few natural disasters which also impacted capacity have all led to a carrier’s market. We can’t pinpoint the exact toll that the ELD mandate has taken on the industry just yet, but we should have a firmer grasp after the April deadline comes and goes. In the meantime, check out some of the comments that DAT collected on how businesses have been affected by the mandate here.